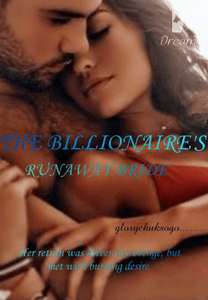 McCarter Spencer, New York's biggest business mogul and most eligible bachelor. At age 24, he owned over 25 percent of properties in New York, which included Hotels, Club houses Restaurants and even the Prestigious 'Spencer Conglomerate'.

On a mission to acquire 30 percent shares of the bedridden Edward Monteiro's Company, Carter finds himself in a precarious situation where he has to marry Camilla, Edward's only daughter.

They both find themselves living together even before the wedding. After a few weeks of keeping to themselves and thinking the worst of each other, they finally become friends due to a certain incident. As time went on, one could have sworn they noticed a love string attached to their "friendship"

Things take a fateful turn when Camilla disappears, just a night after Carter confesses his feelings to her; a night to their wedding, leaving no trace of herself and leaving an already smitten Carter, devastated and heartbroken.

What happens when 5 years down the line, Camilla shows up at Carter's wedding, causing a stir. She doesn't only show up with a bundle of joy; Carter's son, she comes having a mission to execute. REVENGE.

Meanwhile, she has to do all she can to convince Carter that she never left him, and she loved him as well.