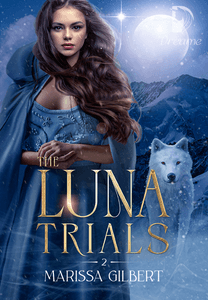 After Savannah’s mate turned out to be a traitor who tried to kill her family, she decided she did not want to love or feel anything anymore. So, when the Lycan King of the Northern Kingdom comes to her brother to demand her hand in marriage in return for his support, she decides to make the ultimate sacrifice and accept the proposal.

However, when she arrives in the North, she has the shock of her life finding out that the King did not count on her agreeing to become his wife. Moreover, to avoid marrying her, he invited twelve other brides to compete for the title of The Luna of The North.

Now just a contender in The Luna Trials, Savvy has to choose whether to take the insult and leave... or stay, making the North King regret the day he asked for her hand. She will have to become a rival of twelve gorgeous women who would stop at nothing to get the crown on their pretty heads. The North is a rough place, and some of the competitions are dangerous, to say the least. The northerners will only accept the Luna that is worthy.

Everything gets even more complicated when Savannah starts falling for a stranger, who is the only person nice to her in this foreign place. Her mate suddenly appears back in her life, and the enemies of both kingdoms start to act, endangering everyone and everything.

This is the second book in the series, but it can be enjoyed as a standalone story.

Book I: The Perfect Luna