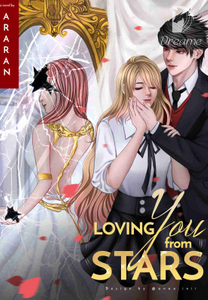 Loving You From Stars

Corale Vincent is just a 20-year-old woman from an ordinary family who has big dreams of studying in Paris. But the betrayal of her boyfriend, Gael Fabian, destroys her dream, her plan that has been on her mind since senior high school.

Corale has given up everything, even intending to study in the next town, Strasbourg according to the advice of her parents and Gael, until news from England said that she got the inheritance from her biological father who recently passed away. One of them was a castle where there was a butler named Vyrion who never smiled once every time they met in the morning.

Vyrion doesn't allow her to come into his world until a 'potion' mess incident changes his behavior and heart, telling her that he's madly in love with her!

What Corale really wanted Vyrion to be kinder to her, but not in love! And again every night she began to dream of him in a different form, around his body bathed in light ... an Angel ...?

WARNING: English is not my first language, I'm sorry if there is a grammar mistake.

Cover by anaa.inii on IG