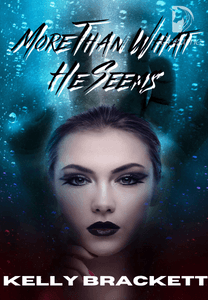 More Than What He Seems

With my eyes closed, I felt the rushing of the wind around my body before everything stopped. I felt hands around my waist, lifting me up slowly before warmth was touching the length of my body from my shoulders to my ankles. The logical side of my brain was denying the possibility, while claiming I was also insane for this dream. The other side was telling me I could hear the flutter of wings.

Slowly, I opened my eyes to the same sienna color from the coffee shop, staring directly into me. Behind him stretched out six layers of feathered wings the same black as his hair, and atop that hair rested two twisted horns. His jeans and t-shirt had vanished, leaving his chiseled chest exposed and his legs now covered by a new swath of black fabric. I reached up and pinched my cheek after releasing my hand from his grip.

“It is.” He replied, his smile making him look sinister, grabbing my hand from my cheek before I could pinch myself again. “I am as real as you, Aura. Look around you.”

Aura is the daughter of a witch who just so happens to be the leader of a cult. The whole basis of this cult is that Aura is to be Lucifer, the Lord of Hell's, Bride. As much as she protests this, she falls in love with the man named Luis. What life does this lead her to live? The path he walks is dark. Who knows what his truth is, but Aura does her best to learn it. When he finally reveals who he is, what is her response to it?