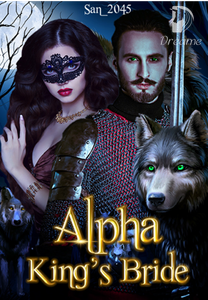 "You have only two options in front of you, omega. Either accept the punishment for breaking into my Palace or be my Queen. Choose wisely"

The omega chewed on her bottom lip, voice breaking as she nodded. "I-I will be your Queen, my lord."

Meet Ellis Valerio, an elite Pack Alpha of Moons. After several years of training, he finally took over the throne as the new Alpha King. No one wants to do business with him unless he takes a Luna. There's one problem-his mate died when she's very young. According to the prophecy, anyone who takes her place meets with an untimely death.

Anna is a rebel omega with too much to fight. That includes killing the Alpha King of Moons. On her mission, she's caught and presented with two choices- marry the King or suffer the consequences of her actions. Through a flurry of dressy gowns, dominating alphas and vengeful omegas, she finds herself at the centre of everything she's never wanted.

A cold King with nothing to lose, an omega with tons of secrets and a kingdom full of gossips. What could possibly go wrong with this arrangement?