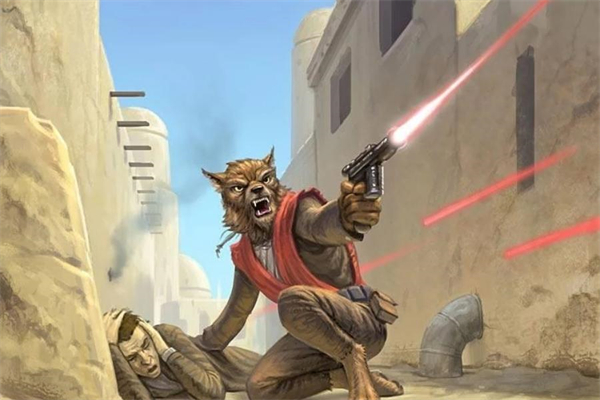 Werewolves are created by the dark side, according to Star Wars. Although the Skywalker story takes place in a galaxy far, far away, everyone involved uses real-world mythology, legends, and even some theology. One of such is lycanthropy or werewolf mythology.

So, when George Lucas invented the Force, he combined elements from nearly every myth and belief on the planet. The Shistavanen, the striking werewolf race, is certainly influenced by werewolf mythology.

The Origin and Species of Werewolf Star Wars

The Shistavanen are from the Uvena system’s planet Uvena Prime. In addition to natural selection, mysterious genetic engineers shaped the said species.

Shistavanen had prominent muzzles, keen claws, large pointed teeth, and pointed ears on top of their skulls, like many werewolf species. They also had big glowing eyes and could run at tremendous speeds for long periods of time without tiring. On top of that, they can use two or four limbs alternately.

The Shistavanen have great hearing and smell, as well as good night vision because they’re predators. However, this increased their sensitivity to harmful light, sound, and odor. Caet Shrovl, for example, may be an albino (although she believed her condition to be the result of an experiment the Empire did on her mother, rather than natural causes).

Who Is the True Star Wars Werewolf: Voolvif Monn, Lak Sivrak, or Defel?

Wondering who the real Star Wars werewolf is? Let’s find out. Spoiler alert: you can be the judge of this.

Let us give you a trivia first: Lav Sivrak is arguably the most famous Star Wars werewolf. In fact, the Lak Sivrak action figure was sold thousands of times worldwide.

Lak Sivrak, also known as Sivrak, was a Shistavanen scout who worked for the Uvena System Constabulary on occasion. Sivrak rose to prominence while working for the Galactic Empire, oblivious to his masters’ oppression.

Lak Sivrak then discovered a hidden settlement of Alliance to Restore the Republic members. As a result, Lak Sivrak decided to assist them despite his lack of political commitments. He learned of their status as fugitives and promised not to tell anyone.

Regardless, the Empire uncovered the village and determined that Lak Sivrak had failed to register it. Sivrak then became an Empire fugitive and was forced to hide in Mos Eisley from stormtroopers.

During the Battle of Endor, Sivrak was a starfighter pilot. His spaceship was irreparably wrecked. Dice Ibegon approached him again, this time using the Force to give him one final chance.

Lak Sivrak could go back in time and turn his back on the Alliance when he first met Ibegon in the cantina, knowing he would have to suffer and die otherwise. After his heroic death on Endor, Sivrak chose to stay with his lover and joined her as a Force ghost.

During the Clone Wars, Voolvif Monn was a Shistavanen Jedi Master and a Jedi General. Monn was taken as a newborn from a planet near the Arah asteroid belt by a Jedi named Paouoish Rahhdool when he was discovered to be Force-sensitive.

Rahhdool returned to Coruscant with his new Padawan to train in the ways of the Force’s light side. Voolvif Monn showed promise as a Jedi, eventually becoming a Jedi Knight before 22 BBY. Monn then went above and beyond the Jedi habit of seclusion and solitude.

Voolvif Monn was part of a squad of Jedi sent to Geonosis to rescue Obi-Wan Kenobi, Anakin Skywalker, and Padmé Amidala when the Clone Wars broke out in 22 BBY. He was also one of the few survivors of the fight that followed. Plus, he had the skill to deal with Separatist droid forces earned him the title of Jedi Master.

In addition, Voolvif Monn took part in several additional fights, notably the Battle of Muunilinst, throughout the three-year conflict between the Republic and the CIS. Interestingly, he emerged victorious in each of them.

Defel Star Wars were a sentient species with the capacity to bend light around themselves. As a result, they can become practically invisible.

When Luke Skywalker and Obi-Wan Kenobi arrived in search of a passage to Alderaan just before the Battle of Yavin, a Defel named Arleil Schous was a patron of Chalmun’s Spaceport Cantina. Glahst Ombra was a Defel mercenary who worked with Chelli Aphra until Magna Tolvan murdered and skinned her.

Why the Wolf Man Is Removed From Star Wars

The production of A New Hope was funded by Lucas himself. As a result, shortcuts were taken to keep prices down.

Plus, the decade-old British Royal Air Force flight suits were used in all three Original Trilogy films, including the cantina sequence.

Bringing aliens into the cantina was no exception. Not all of the costumes and animals could be produced to order with barely ten weeks to spare. Hence, an extra in the cantina was outfitted with a repurposed big human-fly head in this manner.

Thankfully, the latter ended up on the cutting room floor with Han Solo’s cantina date, Jenny. Other masks were recycled as well, as evidenced by the presence of years-old Frankenstein’s monster and werewolf masks from Rick Baker’s vault.

At the start of the cantina scene, the latter was the red-eyed tea-sipper. The second wolfman wasn’t even from a previous film. It was actually an off-the-shelf rubber mask that could be found in any Halloween store at the time.

Both wolfmen were supposedly despised by George Lucas. It’s fair that he dislikes the second because of a simple rubber mask that can’t emote or move in any manner. As a result, both the CGI replacements and Lucas’s rumored feud with them failed to be part of the movie.

Star Wars is undoubtedly one of the most famous franchises of all time. With its diverse inspirations, we’re glad to see werewolves in the movies and series.

Speaking of werewolves, who do you think is the true Star Wars werewolf? Let us know in the comment section below.