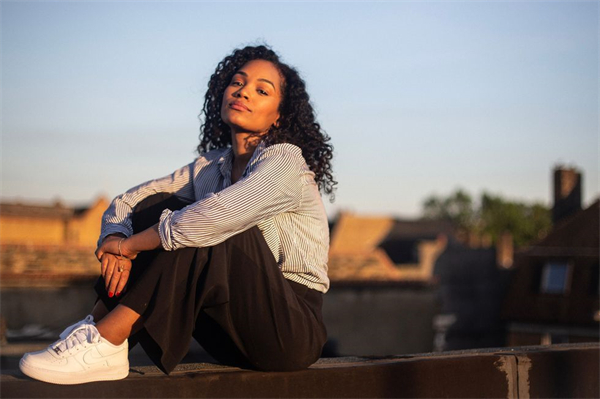 Tahirah Sharif is an up-and-coming British actress with an exciting portfolio. The beauty and intensity she showed on screen has won her praise and admirations. She was recently nominated at the BAFTA (British Academy of Film and Television Arts) for her supporting performance in the ITV cop drama The Tower. Tahirah can be found on social media via her Instagram @tahirah_sharif, where she has amassed over 70 thousand followers. On her page, she would often share snippets of her acting works as well as her (very outdoorsy) downtime activities and impeccable daily looks.

Tahirah was born Tahirah Amandla Sharif in London. Her father is Jamaican and her mother is Pakistani, but Tahirah grew up in South West London. Despite her presence on social media, she keeps details of her personal life private, including her dating status. Tahirah never discloses her age, though it is believed that she is in her 20s.

At age 6, Tahirah began acting in a school play. She went on to attend the Brit School for Performing Arts & Technology in Croydon, London, before completing her study at The Identity School of Acting (IDSA) in Brixton. IDSA, founded by prominent British talent agent Femi Oguns and boasting well-known alumni such as John Boyega, Letitia Wright, Malachi Kirby and Jessie Mei Li, is a drama school famous for nurturing diverse talents from all backgrounds.

Her first acting credit was 2010 short film Assessment, where she played a struggling ballerina named Rachel. Her big breakout came in 2015 via the BBC high school series Waterloo Road, where Tahirah played Carrie Norton. In 2020, she starred as Rebecca Jessel in Netflix’s horror anthology The Haunting of Bly Manor – a role that gave her global recognition. In 2021, she was cast as rookie constable Lizzie Adama in police corruption drama The Tower. Her performance in the BBC series earned her a Best Supporting Actress nod at the BAFTA the following year.

Besides acting, Tahirah is also a certified personal trainer.

In her more than ten years of acting career, Tahirah Sharif has played multiple roles of various complexities. While her filmography is dominated by sweet, girl-next-door roles like the ones in A Christmas Prince or Waterloo Road, recently the actress has broadened her range by taking on more challenging roles like the ones in The Haunting of Bly Manor and The Tower. Her decisions paid off, given the rave reviews she received from the latter roles.

That’s not to say her earlier roles were flimsy. In her early works, Tahirah got to work with seasoned actors like Rose McIver (on the A Christmas Prince franchise) and various British senior actors on Waterloo Road, ably balancing them out despite her fewer credits. Often supporting characters play crucial roles in shaping the journey of the main character. Without them, the main actors are not as strong or sympathetic in their characterization. Good actors, small roles notwithstanding, can fulfill this void well. And Tahirah did this well in her earlier roles.

And so, when it came time for her to step up in bigger capacities, the London native was ready. As Miss Jessel in Bly Manor, she is at first sweet and innocent before tragedy makes her embittered yet still struggling to retain her goodness. Tahirah really pulled all the stops portraying Miss Jessel’s devastatingly tragic arc. In The Tower, she played newbie constable Lizzie, who developed an illicit relationship with a colleague. She utilized her experiences playing nice characters and then twisted our expectations by revealing the grey morality underneath it.

Movie 1 with Tahirah Sharif: The Haunting of Bly Manor

The second installment of The Haunting horror anthology relocates the terror to English manor. Tahirah plays Rebecca Jessel, a naïve young nanny employed to care for the two children living at Bly Manor. But when the enigmatic Peter Quint (Oliver Jackson-Cohen) turns up at the house and begins seducing her, it sets off a chain of events that will lead to tragic consequences.

Tahirah goes from sweet and gullible to miserable and embittered in this tragic horror tale. She ably conveys Miss Jessel’s gradual deterioration since arriving at the doomed manor.

Waterloo Road is a TV drama chronicling the lives of the staff and students at a comprehensive school of the same name. The series featured several future British big-time actors such as Bridgerton’s Phoebe Dynevor and Rege-Jean Page, with the latter playing Tahirah’s big brother. She plays Carrie Norton, the sister to Rege’s Guy Braxton. While Guy is rebellious, Carrie is dutiful. Her role largely revolves around being caught up in the feud between Guy and their mother.

In the three installments of the Netflix Christmas romcom, Tahirah plays Melissa, Queen Amber’s best friend from America. She’s been Amber’s biggest supporter from the time she was a journalist until she’s already the Aldovian Queen. However, Melissa really plays a significant part in the third installment, A Christmas Prince: Royal Baby. Here, the sweet best friend develops a romance with the King and Queen’s former foe Simon, one that is put to the test by a conspiracy.

Movie 4 with Tahirah Sharif: The Tower

In her BAFTA-nominated role, Tahirah plays constable Lizzie Adama. Lizzie has been in the job for six months and is already involved with one of her married superiors. When the girl vanishes after witnessing a veteran Metropolitan Police officer and a young Libyan girl fall from a tower block, a police corruption investigator named Sarah Collins sets out to uncover the truth.

Playing a key character with complicated ties to the rest of the characters, Tahirah is vulnerable and raw in her much-raved performance.

Assessment is a short film about a ballet school student and a local boy (played by Joe Cole) who struggle with being assessed on adult terms. The coming-of-age story reflects the journey of many young teens entering adulthood.

In her debut acting role, Tahirah shows her potential as a fresh-faced ingenue facing the crossroads of life. She and Joe Cole display sweet chemistry together as they go through the journey to adulthood.