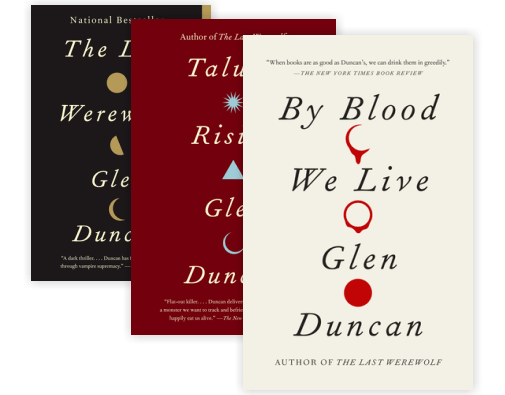 The novel, which was published in 2011, follows the last werewolf on Earth as he is pursued by a squad of monster hunters and mafia-like vampires. The werewolf is vicious, sexually gluttonous, and self-loathing until he encounters an allegedly mythological creature—a female werewolf—and falls madly in love.

Sounds exciting, right? But do you know what’s more exciting? Knowing the ins and outs of Glen Duncan The Last Werewolf series.

If you don’t have time to scour the internet or library for them, we got you! This post explores everything you need to know about the trilogy entitled The Last Werewolf, Glen Duncan’s masterpiece.

Glen Duncan was born in Bolton in 1965. He attended Lancaster University to study philosophy and literature. Duncan worked in a bookstore for a while before becoming a writer and traveling across the United States and India.

Duncan was designated one of Britain’s twenty best young novelists by The Times Literary Supplement.

His novel, The Last Werewolf, was released to critical acclaim in 2010. The second and third novels in The Last Werewolf trilogy, Tallula Rising and By Blood We Live, were released in 2012 and 2014, respectively.

What are Last Werewolf Trilogy Series

Ready for more? Here are the tidbits about the wonderful The Last Werewolf series:

Jake Marlowe is now a little more than 200 years old. Jake has an insatiable appetite for excellent scotch, reading, and the pleasures of the flesh. He also has a ravenous libido and a craving for meat that drives him insane every full moon.

As the only remaining werewolf, Jake does not know if he can go on. That is until he met Tallula, a female werewolf.

Fascinating perfectly describes The Last Werewolf. Duncan did such an amazing job crafting a heartwarming love story that transcends monstrosity.

Jake is killed as a spear went through his stomach. Talulla Demetriou now contemplates her life without Jake. She also has to consider the fate of her unborn were-baby. How is she going to survive?

The second book sends you through a rollercoaster of emotions. Tallula’s grief and her baby send readers through a sorrowful yet hopeful plot.

3.By Blood We Live

In this last installment of The Last Werewolf trilogy series, Talulla has reached an unsettling balance. She looks to have a regular family life, with her twins securely by her side and the devotion of her lover, Walker.

Everything seems fine, except for their monthly metamorphosis into werewolves ravenous for human flesh. Plus, her peaceful life is bombarded by dreams of Remshi, a 20,000-year-old vampire.

The conclusion to the Last Werewolf trilogy series is definitely worth the wait. While we rooted for Jake and Tallula in the first book, seeing Tallula happy with her twins is a breath of fresh air.

How the Plot Evolves in Last Werewolf Trilogy

Glen Duncan The Last Werewolf Series starts with Jake. During that time, Jake thought that he was the only werewolf left on Earth. Little did he know that a female werewolf named Tallula exists.

As the first book ended, Jake was killed by a spear. It was a heartbreaking ending, given that Tallula was pregnant.

The second book progressed to Tallula. The main character Jake was out of the picture, so Tallula had to deal with their offspring by herself.

Unexpectedly, Tallula met Walker and became her lover. In the third book, Tallula had the devoted Walker and her twins. While it seems like Tallula had it all together, she did not.

The Last Werewolf trilogy series evolved dramatically. The first book killed one of the main characters, leaving the other one to be explored in the second and third books.

5 Similar Books to The Last Werewolf

Karyn and her husband Roy had moved to Drago, a quiet California community. Drago looked like other little rural communities on the surface. But it was not the case. Will the couple survive?

This is a well-written book with thrilling, and sometimes extremely frigthening scenes. Overall, it was a great read though.

An old race of lycanthropes is expanding as the initiated persuade Los Angeles to join their pack. Anthony and the girl he adores, a female werewolf who has deserted her pack, are caught in the crossfire.

Sharp Teeth is a stunningly grim story about werewolves. Interestingly, it has elements of politics and love.

Lawrence Talbot’s youth was cut short when his mother died. He spent decades healing and trying to forget. However, when his brother’s fiancée seeks him down to help search for her missing love, Talbot comes home.

Based on a major motion picture, The Wolfman effectively captures the essence of the film. With room for more descriptions and character development, this is a book you don’t want to miss.

Reuben Golding, a young reporter on assignment, arrives at an isolated estate high above the Pacific. The owner immediately seduces him, but their perfect night is disrupted. The guy is bit by a beast he can’t see in the rural darkness.

Anne Rice has this special way of dragging you into her stories. She also makes you care about the characters she creates. This book will certainly immerse you in the characters’ plight.

5. The Werewolf of Paris

Endore’s werewolf, Bertrand Caillet, is an outcast who travels to quiet the beast within. The plot is episodic, moving across19th century France and into hotspots such as the Franco-Prussian conflict.

This book has an intriguing concept. Endorse’s writing style deserves to be mentioned as well. When combined, the intrigue and writing style will make you not want to put this book down.