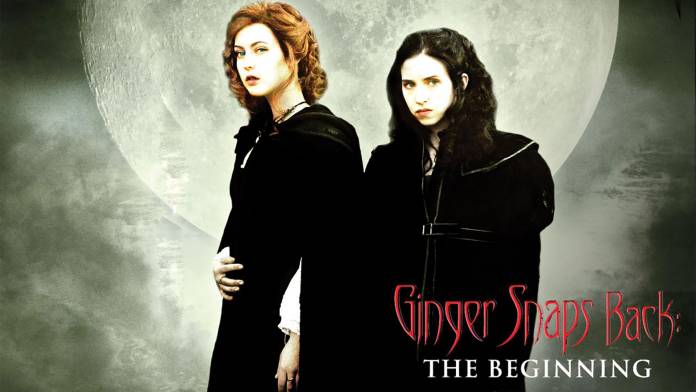 Ginger Snaps Back: The Beginning is the third and final entry in the Ginger Snaps movie series. It serves as a precursor to the Ginger Snaps 2000 film and Ginger Snaps 2: Unleashed. The film is set in nineteenth-century Canada and follows the Fitzgerald sisters Brigitte and Ginger, who have the same names as their modern-day equivalents.

Ginger Snaps 3 had mixed reviews, so for the sake of our sanity, I made an unbiased review of the movie. This post features the good and the bad sides of Ginger Snaps 3. Enjoy!

The film begins with a brief overview of the Northern Legion Trading Company. The scene then pans explaining that each spring, a party from the fort journeyed to Hudson Bay to trade pelts for winter provisions. However, the party never returned in 1815.

This is where the narrative begins, over 200 years before “Ginger Snaps.” Brigitte and Ginger are trapped in the Canadian bush with their horse when they find a seemingly abandoned camp with indications of a horrific attack.

They then come upon an elderly Indian woman who tells them she, too, once had a sister. She then hands the girls two necklaces with bird skulls on them. The necklaces once belonged to her and her sister.

The woman then refers to them as “The Red and The Black”. She then tells them to “murder the boy, or one sister will kill the other.”

The girls’ horse then gets startled and flees. They attempt to pursue it, but Brigitte’s foot becomes trapped in a bear trap set by an Indian hunter.

Ginger then returns to the camp in search of the old woman. However, the hunter comes before she does. The girls regard him as a threat until he frees Brigitte and guides them to Fort Bailey, where they seek sanctuary.

Ginger then says that they are the daughters of a trader who drowned while trying to get to the East. The men there are wary of them, yet the sisters are allowed to stay.

It turns out the creatures are werewolves. They have protected the fort for quite some time. Murphy, the fort’s physician, checks Brigitte’s wound. He then applies a leech, to test her for werewolf infection.

The sisters are then led to a room that belonged to Wallace’s son. Awakened by a voice, Ginger goes around the corridors to investigate.

Later on, she finds the source: a deformed boy in a small, unlit, locked room. He then bit her as he escapes. Will Ginger survive? How about Brigitte?

What Ginger Snaps 3 Got Right

In embracing feminine strength and rejection of societal constraints, the film is as unwavering as its predecessor. It goes a long way toward making up for Brigitte’s cruel ending in Unleashed.

In Ginger Snaps 3, Brigitte and Ginger’s sisterhood has never been stronger. The two women strive to protect one another from every threat, including the justifiable threat of a good man wanting to preserve his land from a werewolf invasion.

Brigitte also never contemplated leaving Ginger when it becomes evident that she has been infected. Plus, after Ginger has nearly transformed and rushes out in pursuit of flesh, she returns to save Brigitte from execution at the hands of the men who blame her for Ginger’s carnage.

Furthermore, Brigitte never fears her own death at Ginger’s hands – or Ginger’s death at hers, as a local seer predicts. They are repeatedly told that one sister will be responsible for the death of the other, but neither succumbs to the prophecy.

In addition, the performances of Ginger Snaps Emily Perkins and Katharine Isabelle Ginger Snaps were fantastic. The actresses’ performances were just as brilliant as in the first two films. They did not waver in terms of getting the audience to relate to them. The sad scenes were heartbreaking and the happy ones made me feel ecstatic.

What Ginger Snaps 3 Got Wrong

I hate to break it to you, but Ginger Snaps 3 got some things wrong.

For one, Brigitte and Ginger are shuttled to the side of the conflict until the final 30 minutes of the film. This means that the Ginger Snaps movie spent much of the time meandering around in a trance while the soldiers of the fort take all of the action (often for ill rather than good).

If this seems like a feminist manifesto against the history of female subjugation, you might be giving Ginger Snaps 3 too much credit. It’s because while the film is well-paced and wonderfully gruesome, it lacks the thematic substance of its two predecessors.

There’s not much going on beneath the surface. This is fine because the surface is fairly amusing in the first place. However, it makes for a slightly disappointingly sparse plate in comparison to the first two hearty meals (aka Ginger Snaps 2000 and Ginger Snaps 2).

The plot is also a little bit messy, with side stories that are not that relevant to the central theme. Speaking of the theme, the Ginger Snaps movie features a shallow thematic depth compared to Ginger Snaps 2000.

Ginger Snaps 3 might not be as great as Ginger Snaps 2000, but it’s still an amazing film. Even if it did not meet my expectations of a Ginger Snaps film, the movie still showed that women are strong and that sisterhood is something worth fighting for.