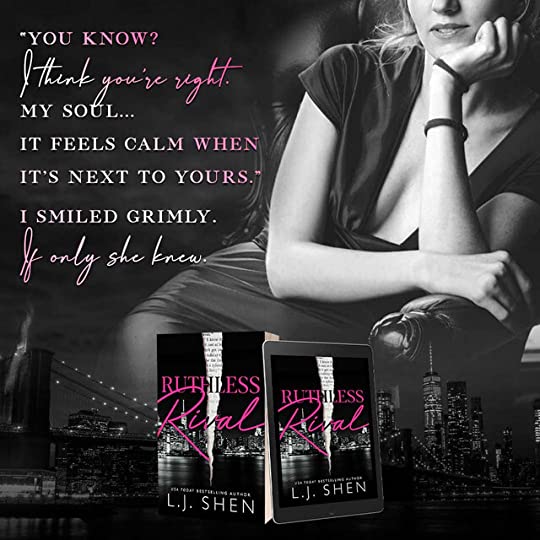 L.J. Sheen has it nailed down when it comes to writing contemporary, new adult, and young adult romance. Her best-selling dramatic romance novels have made her quite a celebrated figure in the literary world, with thousands of fans around the globe – including us – anticipating her next release.

So, naturally, when L.J Shen Ruthless Rival finally dropped on May 3rd, 2022, we beelined for the local bookstore to get our fill of Shen’s exciting and passionate world of romance.

What is Ruthless Rival about

Published by Amazon, Shen’s Cruel Castaways series follows the story of three friends – Christian Miller, Arsène Corbin, and Riggs Bates. In its first installment Ruthless Rival, it delves into the enthralling love story of lawyer Christian Miller and publicist Arya Roth. As the plot advances, the reader becomes more and more invested in the fate of this friends-turned-enemies duo, wondering if love really conquers all.

The main plot of Ruthless Rival

Owlcrate Ruthless Rival follows the heartwarming friendship of the upper-class Arya and the son of her househelp Nicholai, which soon blossoms into love. However, this steamy, passionate relationship is indigestible for Arya’s wealthy and influential father, and Niko is conveniently removed from her life by the adults. Arya is made to think that Niko ran away of his own accord and then died, while Niko believes that he has been betrayed by the love of his life.

Many years later fate brings the two together again, but this time as sworn rivals. Arya has grown up to be a big PR agent defending the sexual harassment case of her father (and her biggest client), and Niko has made a new identity for himself as the hotshot lawyer Chritian Miller pursuing this very case. What follows is a tale of love, lust, and revenge – and Arya will have to choose between her soulmate and her blood.

The main characters in Ruthless Rival

Christian Miller (birth name Nicholai Ivanov) is Arya’s unlikely friend and the hero in our story. Being driven away from the Roth household as he had dared to fall for the princess of the house, he carries great resentment for her in his heart. Following the disastrous events of his childhood, Niko decides to reinvent himself and gives himself a new identity when he is accepted into Harvard law school.

His new character emerges as the unbeatable and talented young lawyer Christian Miller, who is now presented with an opportunity to exact revenge on the people who destroyed everything for him in his childhood. The question is, how far will he go?

Arya Roth is the wealthy young girl who falls hard for the housekeeper’s son and is willing to risk everything for it. However, fate has something else in store for her and her childhood love is driven away from her. Thinking he is dead, Arya eventually moves on and grows quite the successful publicist with plenty of influential clients – one of the most important being her own father.

Conrad Roth is Arya’s conniving father who arranged for Niko to be conveniently removed from his daughter’s life once he learned of their forbidden romance. However, twenty years later, his fate lies in the very hands of the person that he kicked out of his house all this time ago.

Faced with a sexual harassment charge, Conrad stands to lose everything if his publicist and daughter, Arya, fails to protect his name. Will he emerge unscathed from all this fiasco? Or will he lose everything he has worked for due to the personal agenda that Christian Miller has out for him?

Most applauded dialogs or excerpts in Ruthless Rival

L.J. Shen is a master of words and the queen of smart banter. There are many parts from Ruthless Rival that especially stood out to each. Each conversation between Arya and Christian is filled with fireworks that leave us biting our lips in anticipation.

Here are some of the moments we absolutely loved from the whirlwind romance novel.

“We were frighteningly alike. Fighters. Bloodthirsty.

Claws out, at a seconds notice”

“Just remember, to become king, you must dethrone someone first.”

“She didn’t slow down when she spotted me through her sunglasses. She stopped when our bodies were flush against one another, swung her arm backward, and slapped me so hard I was pretty sure parts of my brain were splattered on the sidewalk.

“You deserve much more than that after the revenge plot you planned for me and my family, Nicky.”

Ruthless Rival by L.J. Shen is an enthralling read that beautifully captures the whirlwind romance between two powerful and strong protagonists. Each dialogue shared between Arya and Christian holds hundreds of emotions and we can practically see the sparks flying as the story progresses. All in all, we would give the novel a rating of 4.5 out of 5 stars.

If you are an avid YA romance reader, you will definitely want to read this one for yourself. The book can be ordered off of Amazon or picked up from your local bookstore if you choose to purchase it. Alternatively, you can request it to be stocked at your local public library.