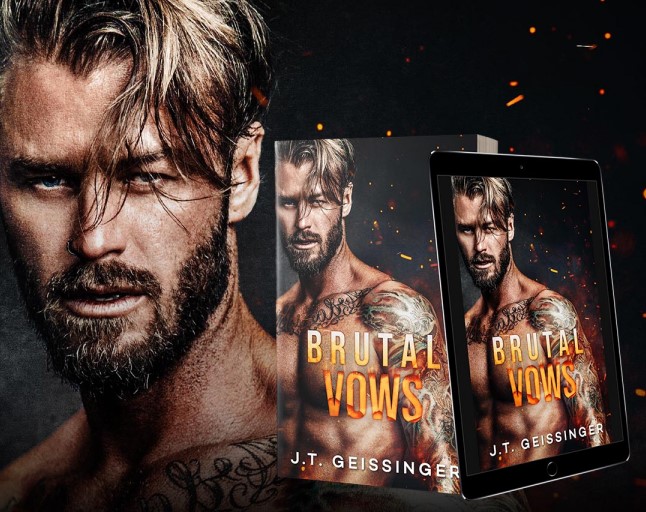 After being completely blown away by Ruthless Creatures, Carnal Urges, and Savage Hearts, we knew J.T. Gessinger would not disappoint with her fourth and final book in the Queens and Monsters series. And so, along with her thousands of devoted fans around the world, we, too, were impatiently waiting for the release of Brutal Vows.

So by the time the last installment in the series finally dropped on the 28th of April 2022, we had already preordered it to be delivered to our doorstep. And when we tell you that we devoured the whole thing in two sittings, we really aren’t making anything up. This enthralling book had us engrossed from the very first page.

What is Brutal Vows about?

Brutal Vows J.T. Gessinger is the last novel in the dark romance series Queens and Monsters. However, with all the important details clearly hashed out, it can also be a standalone read for anyone craving a dark and dangerous love story.

The steamy romance novel published by Amazon is targeted primarily at a young adult audience, but can really be enjoyed by adults of all ages. Even the most NSFW scenes in the book are tastefully and creatively crafted so that it isn’t just another of those trashy, explicit teenage romances. In fact, the storyline itself is quite mature and interesting.

The main plot of Brutal Vows

Brutal Vows caters to our craving for a more detailed story of the series’ hero Homer ‘Spider’ Quinn. In this book, we are introduced to a softer side of the tough Irish mobster, as it takes us through his whirlwind romance with the Italian Mafia heiress Reyna.

When an arranged marriage is decided between the Spider and Lili Caruso, the sweet, simple 18 year old daughter of the Italian Mafia boss, Reyna is lit with rage. Having gone through the horrors of such mismatched matchmaking in order to preserve peace herself, she refuses to let her niece be subjected to the same fate. Hence, when Lili is caught in a compromising position with her lover on her wedding day, Reyna takes that chance to offer herself up for the sacrifice in order to protect the young girl.

What follows is a toe-curling romance between the newlyweds, Homer and Reyna. While sparring with each other and trying to bring the other down, they are forced to accept the undeniable attraction between them. Slowly, they come to realize the love that has been masked by all the hate that they had been taught, and learn to appreciate each other.

The main characters in Brutal Vows

Homer Quinn, nicknamed the Spider, is a tough Irish mobster who is a creature to be feared. Involved in the dark and dangerous matters of the Mafia, he has become quite immune to tenderness and love. But can the fiery personality of Reyna Caruso teach him to fall in love again?

Reyna Caruso is the fiery Italian Mafia princess – and loving aunt to Lili Caruso – who is the real shot-caller in the house while letting her brother believe that he has all the power. But when her brother decides to sacrifice his young daughter to the ruthless Irish mob king, she is left unable to reverse the clock.

That is, until Lili is found on the verge of bringing everything down, and Reyna saves her brother’s face by offering herself up as a substitute for her niece in an arranged marriage with Homer Quinn. In this war of the Spider and the Black Widow, who will emerge victoriously?

Lili Caruso is the sweet 18 year old who has been bargained by her own father for peace and power. Despite being madly in love with another person, she is being forced into an arranged marriage with a much older Irish mobster – somebody she knows she will never love.

However, her beautiful aunt absolutely refuses to let her suffer the same fate she had to, and she is brilliantly saved from it all when Reyna offers herself up in her stead. But the question is, who will save Reyna Caruso now?

Most applauded dialogs or excerpts in Brutal Vows

J.T. Gessinger Brutal Vows is studded with unforgettable exchanges and toe curling dialogues between its unique characters. However, it is the witty verbal sparring and the sweet affirmations of love between the Spider and Reyna that have our hearts doing somersaults in the middle of the day. Here are some parts that left us gasping for breath as we read them:

I think you’re a brilliant golden sun in a sky that’s only ever known the black and starless night.

After what I’ve been through, the devil himself could show up demanding my soul, and I’d tell him to kiss my sweet ass and fuck off back to hell.

You’re a privilege I don’t deserve, but I’m going to spend the rest of both our lives trying to be worthy of you.

In all my thirty-three years, I’ve never known what it’s like to find shelter from the storms that always followed me. I’ve been lost at sea for so long, I thought that’s what it meant to be living. It isn’t until now, with a glimpse of a golden-haired man waving at me from shore in the distance, that I realize the storms might be behind me. My sails are full, the seas are smooth, and the wind at my back is soft and easy.

And finally, the one that tugged at our heartstrings the most:

From unique, powerful characters to brilliant writing, Brutal Vows by J.T. Gessinger gets a ten out of ten in our books. Equally captivating as a part of the series as well as a standalone read, this is the dark romance book of the month for us. All the scenes and exchanges are so well crafted that nothing seems to be out of place. With wonderful editing, no loopholes were left unaddressed and the whole series is wrapped up seamlessly in this final installment.

The sizzling romance can be ordered off of Amazon or purchased from your local bookstore. It is also available at several public libraries across the country where it can be loaned out to you.