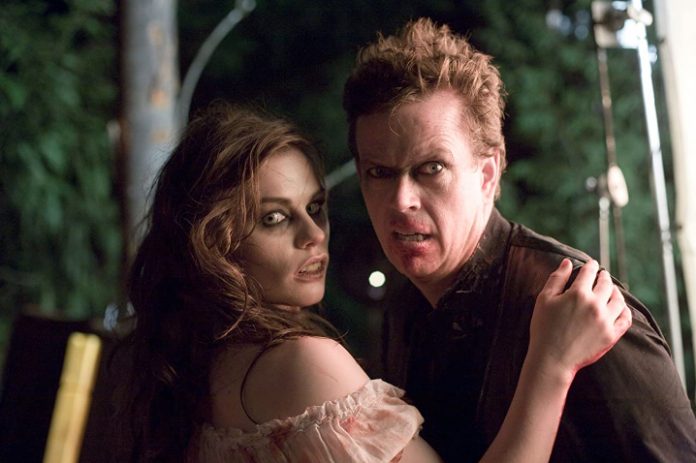 The 2007 movie Trick R Treat is a horror comedy anthology film directed by Michael Dougherty. It tells four loosely connected Halloween stories all taking place during the same night. All four stories involve people getting in grave trouble after breaking a Halloween tradition. Each time, Sam, a mysterious trick-or-treater dressed in an orange pajamas and burlap sack over his head, would appear to preside over what happens. The film has everything: eerie urban legend, serial killers, vengeful ghosts, vampire, werewolf, you name it.

Since its release, the film has gained a cult following. Trick R Treat-themed haunted house is even introduced during Universal’s annual Halloween Horror Nights, proving its lasting popularity.

Part 1. Plot of the werewolf story

One of the stories in Trick R Treat revolves around a group of girls who visits the town just in time for Halloween celebration. One of them is Laurie (Anna Paquin). Unlike the other girls – one of whom is her sister Danielle (Lauren Lee Smith) – Laurie isn’t as excited about their idea of a Halloween fun night: a wild party in the woods. She sulks at having to wear a Little Red Riding Hood costume while the other girls dress more provocatively.

While Danielle and her friends are busily trying to rope in guys to join them to the party, Laurie decides to split up with the group and enjoy the town festivities instead. There, she finds a man in a hooded vampire costume watching her from afar. Later, the same man follows Laurie into the woods and attacks her. The man appears to have a set of fangs as he attempts to bite Laurie. The screen fades to black, leaving Laurie’s fate undetermined.

Back in the woods, Danielle is frantically calling Laurie. Suddenly, a body wrapped in a red hood falls from the treetop. The one inside is revealed to be the man in the vampire robe, his fangs nothing but part of an elaborate costume. It appears that Laurie’s managed to subdue her attacker and then drag him to the party. As the man begs for mercy, all the girls in the party begin transforming into werewolves, shedding their human skins to reveal the beasts underneath. It also appears that all the guys invited to the party have been incapacitated for the werewolves to feast on.

Laurie is the last to turn. She tells her attacker that she was originally reluctant to make a kill but will make an exception for him. Laurie then fully transforms into werewolf and devours the man as Sam looks on from afar.

1.1. Who is the werewolf? Characters, cast and performance

There are four main werewolves in Trick R Treat:

In addition, there are a number of other werewolves joining them in the woods, each one bringing a date that will end up as their preys.

Part 2. Memorable scenes of the werewolf story or anything you find interesting

The werewolf identities of the Trick R Treat characters are revealed as a plot twist at the tail end of their story. However, a bunch of clues are thrown in from the beginning. During the girls’ first appearances at the costume store, they are seen casually discussing the previous years’ Halloween trips where they always picked a different location to find “fresh meat”. At this point, we never would’ve guessed that they mean it so literally. The imageries of the girls trying on princess costumes as they giggle about their past conquests are also symbolic. The filmmaker is subtly telling us that the girls are wearing a disguise – their human skins are essentially costume hiding the real creatures underneath. It comes full circle later in the story when they’re shown slowly and carefully removing the Halloween costumes and then their human disguise.

Reference to storybook werewolf is also subtly added. During the costume store scene, Danielle is coaxing a sulking Laurie to come out of the dressing room by saying the famous line of the Big Bad Wolf from Three Little Pigs: “I’ll huff and I’ll puff, and I’ll blow your house in.” A nice touch of foreshadowing!

2.1. The meaning of the werewolf story

The werewolf story in Trick R Treat is heavily inspired by Little Red Riding Hood. The most obvious reference is, of course, Laurie’s costume. However, instead of being the hunted little girl, Laurie turns out to be the big bad wolf. There are some neat little details as well. At one point, Laurie is walking by herself to the woods – just like Little Red in the story. Before she devours her victim, Laurie recites Little Red’s famous line: “What big eyes you have!”

The story is actually a cautionary tale against predatory men. Laurie is initially reluctant to join the girls’ men-feasting party. However, she changes her mind when the vampire-costume man attacks her. She becomes the monster to punish the predatory monster. And if you start feeling pity for him, don’t. In another storyline in the movie, the man is actually a serial killer targeting trick-or-treaters.

Part 3. Review of the werewolf story in the movie

The werewolf story in Trick R Treat is one of its most interesting. It’s quite short but well done. The symbolism, the foreshadowing, and the ending reveal are neatly put together that you’d go “how did I not see it coming?!” when it happens. If you like a light horror with decent storylines, Trick R Treat is one to try!