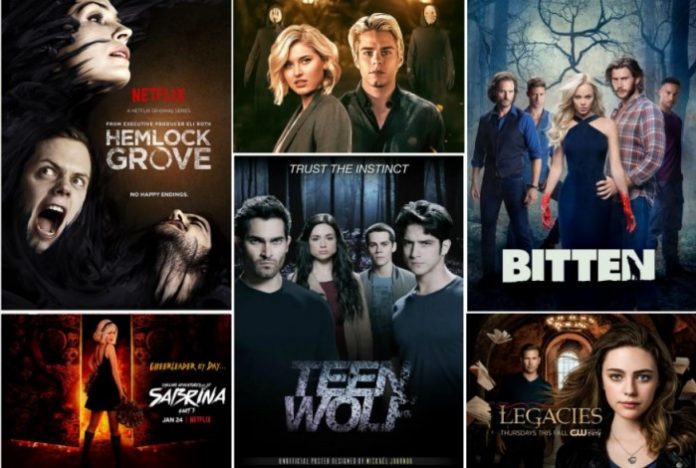 Werewolf TV shows are seemingly the runt of the litter compared to their more en-vogue vampire big brothers. Luckily streaming services are just the full moon that such TV series needed, and you can catch a bunch of great werewolf TV shows on Netflix.

Why Werewolf TV shows on Netflix?

Because not only are werewolves awesome horror-show monsters in their own right, but they’re also a rich source of metaphor. Puberty, sexuality, the malleability of the human condition – all of these, and much more, are ripe for exploration in werewolf TV shows. Let’s take a look at the 9 alpha wolves leading the pack on Netflix.

9 Best Werewolf TV Series on Netflix one by one

Based on a novel by Brian McGreevy (who also co-developed the show), Hemlock Grove is a werewolf murder mystery set in the eponymous town. A new addition to the town, Romani protagonist Peter Rumancek (Liboiron) is suspected of being a werewolf by the whole town. Hilariously, he is. But is he responsible for the bestial murders of several local teenage girls? Only by teaming up with the troubled scion of the local Godfrey family, Roman (Skarsgård) is he able to try to clear his (good?) name. Did he do it? We’re not telling; you’ll have to sniff out the truth for yourself.

Whilst primarily focused on the titular Sabrina, this witchy Netflix hit nevertheless features a whole slew of classic horror-movie monsters, including werewolves. Keep your eyes peeled for Amalia, the possessive familiar of Warlock Nick Scratch, who comes into romantic and physical conflict with Sabrina after she starts dating him…

Set in 1930s Imperial Tokyo, Sirius the Jaeger is a Japanese anime revolving around a group of vampire hunters called “Jaegers” who have chased a group of vampires from China. One of the Jaegers is a young man called Yuliy, a werewolf whose town was wiped out by the vampires they’re chasing. If you like your werewolf/vampire mash-ups (and who doesn’t?) then this is definitely one for you!

When you hear the name “Teen Wolf”, the older among you might immediately think of the 1984 Michael J. Fox vehicle. And whilst this werewolf series is inspired by the said movie, it is very much its own beast. More dramatic in tone than its predecessor, Teen Wolf follows the adventures of Scott McCall, a previously unpopular and un-athletic student who is bitten by a werewolf and soon discovers that his town is actually a hub of supernatural activity (what are the odds?). Scott must balance his newfound abilities with all the pressures of high school, including falling in love with the daughter of a werewolf hunter called Allison Argent. This atmospherically-shot, occasionally po-faced drama is firmly aimed at the teenagers in your household, but stick with it and you’ll soon be howling at the moon with them.

Though ripe for exploration of female sexuality and agency (see the fantastic movie Ginger Snaps), werewolf TV shows sadly neglect to explore these themes too often. Canadian import Bitten aims to change that. Werewolves are traditionally masculine-coded monsters, with their emphasis on aggression, pack alpha behavior, and other typically “male” traits. Bitten succeeds (well, partially) at bucking these trends and making series lead Elena (Vandervoort) into a character a little more complex than your typical lady lycanthrope. Though hewing perhaps a little too close to established werewolf TV series tropes (everyone’s hot, the male werewolves are all aggressive and brooding), Bitten gives paws for thought (sorry) amongst the male-dominated competition.

Gone but not forgotten after a paltry two seasons, this soupy, campy genre pastiche revolves around undercover poor kid Jake Morton (Manley) joining a magic frat-house called ‘The Hermetic Order of the Blue Rose’ and uncovering the dark secrets of his family’s past. Thrown into the mix is an opposing fraternity of werewolves, hell-bent on stopping the Blue Rose from carrying out their schemes.

At its best when lampooning genre trappings rather than embracing them, The Order lurches uncertainly between both approaches and doesn’t quite pull off either. It’s still worth a watch, however, limited as it is to a relatively punchy two seasons.

A spin-off from the parent show The Vampire Diaries, The Originals follows half-vampire (yes, we know) half-werewolf hybrid Klaus as he returns to his old stomping grounds in New Orleans to help out an old werewolf girlfriend – who happens to be pregnant with his child.

It’s a struggle to get into the byzantine lore of the show, springing as it is from the brow of a long-running parent show, but once The Originals finds its own voice it becomes an enjoyable affair. Fully embracing the frenetic plotting that also characterized The Vampire Diaries, The Originals is often befuddling and mystifying, but rarely dull.

Is it cheating to list not one, but two Vampire Diaries spin-offs? Not really, given that the star of Legacies is the offspring of a half-vampire/half-werewolf and a full-blooded werewolf. You can’t get much wolfier than that!

Legacies is a direct continuation of The Originals, following as it does the aforementioned wolfy-vampy ‘tribrid’ child Hope Mikaelson (Russell) in her trials and tribulations at the ‘Salvatore School for the Young and Gifted’. Anyone scenting what might be charitably termed an ‘homage’ to X-Men, but with vampires and werewolves, would be bang on the money. One of the newer werewolf TV shows on Netflix, this is definitely worth a watch if you’re a fan of the Vampire Diaries ‘verse.

Stop us if you’ve heard this one: a young person suddenly becomes aware of her supernatural heritage after coming of age and is plunged headlong into a mysterious, awe-inspiring world that she never before realized was actually all around her.

Show protagonist Clary (McNamara) herself cannot lay claim to being even one-third werewolf, but the cast is fleshed out with plenty of supporting lupine players. Keep eyes open and ears cocked for Luke Garroway (Isaiah Mustafa) – NYPD cop by day, lycanthrope by night – and Maia Roberts (Alisha Wainwright), the troubled werewolf-cum-bartender struggling with trust issues after being turned against her will.

Whilst werewolf series on Netflix are still quite limited when compared with the oversaturated vampire market, we’re sure that we’ve provided more than enough to sink your teeth into until something wolfy this way comes to steal Teen Wolf’s crown. Until then: watch this space for any and all updates to our werewolf TV series list!