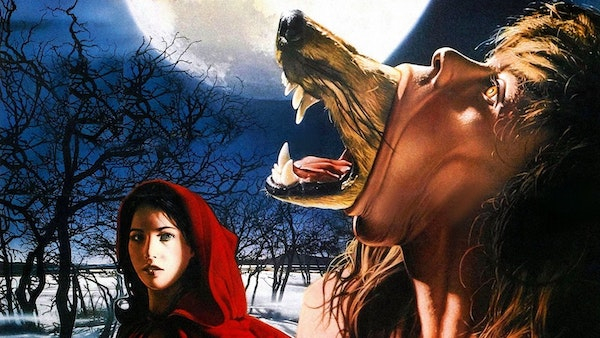 Do you remember when werewolves were considered scary beasts and monsters of the night? Nowadays, they seem more human and attractive in a romantic light. The Company of Wolves changes all of that. Wolves are dangerous creatures, and this British gothic horror film reminds us that werewolves are monsters of the full moon of European literature origins.

Part 1: The Plot of The Company of Wolves

The plot of The Company of Wolves is best described as a dream within a dream. Our protagonist is Rosaleen, a sleeping teenager in 1984. However, most of the film is in a fantasy dream based in the 17th century. In this dream, her elder sister Alice is mauled to death by wolves. After the funeral, Rosaleen is sent to her Granny’s for the night.

To illustrate her point, Granny tells her the first two tales. These tales are littered throughout the film to show the views and morals of the character. We will talk about the first three out of the four because the fourth is a spoiler.

Granny tells the first two tales, linking wolves and man as animals. The first tale sees a woman marry a travelling man (one whose eyebrows meet), who leaves her due to a call of nature. Thinking the wolves have eaten him or he has abandoned her, the woman remarries and has children. Her marriage is not a happy one. The first husband returns and is outraged by his wife. He transforms into a wolf, intent on killing her and her children. They are saved by her husband back from a hunt. Her husband slaps her as she laments about him looking the same as he did on their wedding night.

The second tale is about a wolf meeting with the Devil. This tale is important for two reasons. The first is that the actress Rosaleen plays the Devil, an excellent foreshadowing of the film’s ending. The second is that this tale takes place within a dream. When Rosaleen of the 17th century woke up, we see the boy from the tale (where the dream takes place) in the mirror of her world. It stemmed through. Again, excellent use of foreshadowing.

I will talk about the third tale later as it links to the film’s morals. As for the ending, you need to see the movie to appreciate it.

Part 2: Cast of The Company of Wolves

There are many famous actors in this mainly British cast.

The apparent name that pops up is Dame Angela Lansbury. You might recognise her as the voice of Ms Potts in Beauty and the Beast (1991) and Jessica Fletcher in Murder, She Wrote. Lansbury plays the superstitious yet wise grandma well. Her performance, especially in Granny’s fierce moments, such as arguing with the priest or kicking a boy away from Rosaleen, is joyful and enjoyable.

Lansbury’s performance is balanced out with the innocence of Sarah Patterson. Patterson was so young when filming that the production team had to make special arrangements with her school to allow her to film for nine weeks. She was younger than what the filmmakers wanted originally, but the innocence Patterson had allowed her to sell Rosaleen, not understanding the adult themes and morals of the tales.

Part 3: Morals of The Company of Wolves

For a low-budget film, The Company of Wolves uses its cinematography well. The tales portray this best. In Granny’s tales, the atmosphere is dark and gloomy to represent the dark issues her stories touch on, such as domestic abuse and the depressing views Granny holds. Rosaleen’s first tale has a lighter tone, representing her innocence. Despite this, her story has a dark undertone. It begins along the lines of a woman who had been wronged by a man of high status who set out on his wedding to make wrongs right.

However, this innocence is what leads to Rosaleen’s downfall. She breaks all three of Granny’s rules, empathising with the film’s message of stranger danger.

The quote from Granny sums it up perfectly.

Part 4: Final Thoughts of The Company of Wolves

The Company of Wolves is a film you don’t entirely forget. The cinematography is terrific for its budget and references to Little Red Riding Hood. The overall message to be aware of danger is so relevant today, especially for young girls, that there is stranger danger for a reason.

No matter how charming anyone is, they can easily be as much of a beast as a person.

This can be seen in the tales. The first woman was hurt by both her husbands. The Devil tricked the boy in the second tale. The third sees a woman who was left after being pregnant. She then makes everyone lose their humanity as a result.

Speaking of cinematography, the CGI and special effects still look creepy today. The transformation scene in the first tale is genuinely creepy today, with so much blood. Even the transitions from dream sequences are never boring years later.

If you want a fascinating, creative and exciting film about wolves, I recommend The Company of Wolves.